Conectores as well as whereas while as a consequence since… 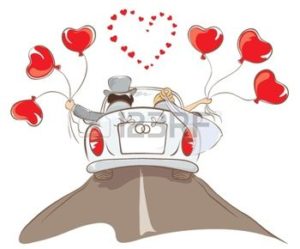 Thanks for your email. Hope you and your family are well in Canada. It’s a pity that you couldn’t come at (to) David’s wedding last week. We missed you.

He told me that if he had free time in during his honeymoon, he would write an email to you.

You asked me about how the wedding had been . It was wonderful.

Firstly, I have to describe the bride because you don’t (know) her. Her name is Sara. She is thirty years old, she is very pretty, redhead and a funny person.

They met in a pub in London seven months ago and they fell in love. They have been living together for five months . Finally, they decided to get married last month. Everything was very fast.

Concerning the marriage ceremony, it was celebrated in Saint Andrew’s Church, near their home at Trafalgar’s square. It lasted over an hour…the priest was very old, and he kept forgetting forgot what he had to say continually.

(Then) the party was in the Sheraton Hotel, a very expensive hotel outside. ?? NO SÉ A QUÉ SE REFIERE CON «OUTSIDE»

Regarding the guests, I met few people, only his close family and some mutual friends. Many colleagues from his job, uncles, cousins and teammates who I didn’t (know) were invited by David. In total, we were two hundred fifty guests. He has got many friends.

The feast was beautiful. In spite of the fact that we were (there were) many people, a lot of quality food was served by an excellent team of waiters.

Finally, we were at Pacha’s disco, near the hotel; we were dancing (danced) until they closed.

To my surprise, I met John in the church, , do you remember him?, our university friend. I hadn’t seen him for a long time. The last time was in my wedding five years ago. He was changed, fatter and balder than before.

If he hadn’t greeted me, I wouldn’t have recognized him.

He gave me regards for  to you.

I hope see you soon.

– 2nd conditional:  if he had free time during his honeymoon, he would write…

– 3rd conditional: If he hadn’t greeted me, I wouldn’t have recognized him.

– present perfect continuous + for:  They have been living together for five months

– pasivas: it was celebrated, … food was served by…

– past perfect:  I hadn’t seen him for a long time

– in spite of the fact that…

– regarding, concerning, firstly, to my surprise